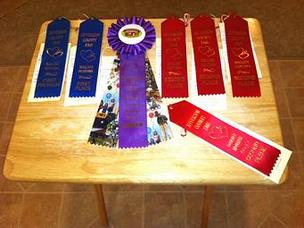 This was my 3rd year entering the Jefferson County Fair.  I don't claim to have all the answers to  baking greatness, however, I did think I knew more than I did!  I thought my chosen recipes this year were "great!" I chose "the best of the best" I thought. Had spent months putting my entree list together.  I entered:

Where did I get all these recipes??? Well, I find alot of them on-line. The Banana Sour Cream Bread was given to me by a friend who said "People love this bread, they always want second and I've won several times with this bread."  The Lighter Than Air Angel Food Cake is one of Giada DeLaurentiis' recipes. I watched her make it on one of her shows and decided right then and there that it HAD to be one of my entries for the county fair.  In choosing my recipes for the county fair, I have a general idea of what I want to enter then I choose recipes according to that.

Last year I entered Raspberry Streusel Muffins and was told two things on the back of the entry card: 1) What flavor? and 2) Muffins must be the same size.  Ok,  I can work on that. So, I decided to enter chocolate muffins (so there would be no question that it "was chocolate!") and I decided there had to be a way to make the muffins all the same size. I watched the Barefoot Contessa on the Food Network make muffins one day and she used a large ice cream scoop to scoop the batter into the muffin pan.  Hmm, I thought - that's a great idea!  I went to Bed, Bath and Beyond and bought a large ice cream scoop.  It was a disaster for me.  It put far more batter into the muffin cups than I wanted it to and it was just horribly messy for me.  Close to fair time this year, I experiemented with 1/4 cup plastic pourable measuring cup.  Sure enough - that did the trick!  There wasn't one mention about the muffins not all being the same size!

About two weeks before the fair, my husband and I went out to dinner and ran into one of the fair judges. Randi asked me if I'd started baking yet. I said no, not yet - I will be starting Tuesday of next week.  I had decided that if I wanted to enter 7 items I'd better do alot of the baking ahead.  I also had to research how to properly store the items once baked.  I read on-line that the best way to keep baked items was to wrap them in wax paper. Cool!  Next time I went to the store I bought a large roll of waxed paper. On Tuesday, I first baked the Death by Chocolate muffins. They turned out great!  I let them cool then wrapped them up in waxed paper, followed by Press 'n Seal, followed by aluminum foil.  NO AIR was going to penetrate these muffins!  I continued baking during the week and wrapped everything up in the same manner as the chocolate muffins.  Tuesday was the only day I had off; the rest of the week I was working, then coming home and baking.  By Saturday morning I had only one thing left to bake - my Awesome Apple Pie.  I saved the "best for last" as I wanted the judges to taste the apple-ey goodness of the pie.

By the time the pie was done, I had half an hour to go before we needed to leave for the fair.  I had baked the pie in a disposable aluminum pie pan - you know, the flimsy kind.  The baked goods are auctioned off that evening and the proceeds go to the Fair Board for upkeep of the fairgrounds.  It is encouraged that you bake your entries in disposable pans as the pan is auctioned off with the baked goods.  They don't want you baking your entry item in an family heirloom pan.  I had put the apple pie on an aluminum foil lined baking sheet and when the pie was done, I took it out of the oven, and because we were short on time, I went to move the pie from the baking sheet to a cooling rack.  The flimsy aluminum pan "bent" almost in half and the crumb topping "cracked" like it'd been in an earthquake.  THIS is the entry I'd wanted to win Best in Show??? Not after it cracked.  I was so disappointed and devasted - for a moment I thought I should just leave it at home and not even enter it.  But, I'd worked hard on it and despite the cracked top, it was going to the fair.

Boulder is about a 20 minute drive south from where we live. The apple pie cooled on the way.

Here's how it played out:

1)  Banana Sour Cream Bread - got a Champion ribbon.
2)  Golden Vanilla Pound Cake - received a First Premium ribbon. (that's a notch above a First
Place ribbon).
3)  Lighter Than Air Angel Food Cake - won a First Place ribbon. Comment on the back of the
entry card was "light and fluffy despite size." It did seem smaller than normal angel food cakes
when I took it out of the pan.
4)  Awesome Apple Pie - received a Second Place ribbon.  The comments were: 1) Good flavor,
and 2) Crumbled crust.
5)  Blackberry Coffee Cake with Streusel Topping - won a Second Place ribbon.  The comments
were: 1) good flavor, 2) too much topping for the amount of cake.
6)  Chocolate, Chocolate, Chocolate Bundt Cake - won a Second Place ribbon. The comment
was "not done all the way through."  Hmmm - interesting. I had taken a large wooden scewer
and had tested the doneness and the scewer came out clean.  I'll have to double check that
next time.
7)  Death by Chocolate Muffins - received a Second Place ribbon.  Comments were: 1) Good
flavor and 2) too moist for a muffin. TOO MOIST????  You've got to be kidding!!!  When we
got home, I went straight to the leftover muffins.  They too had been wrapped in wax paper,
Press 'n Seal, and aluminum foil.  I opened the package and took one out.  I started to inspect
it.  The top was sticky, the inside had a moistness that isn't normally there. By using wax paper,
the Press 'n Seal AND the aluminum foil, the muffin had remained moist - TOO MOIST.  They
weren't too moist for us to devour them over the next few days!!

I LOVE baking and entering the county fair.  It's the one time of year that I can "shine" and show what I know about baking. It's also a time to "learn" about what makes a really great recipe GREAT.