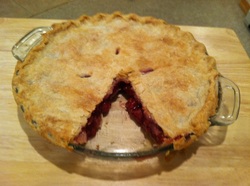 A treasured recipe released in 2001 from the Wisconsin Cherry Queen of Eillison Bay. I used it and received 1st place for cherry pie and Grand Champion Pie Baker at the McHenry County History Society in 2001.  I used the pie crust recipe for an apple pie in 2007 and received 1st place for apple pie and Best of Class Award at the McHenry County Fair.

Measure Crisco with flour, sugar, and salt into a bowl. Mix with a pastry cutter or fork until flour is full of pea size granuals.  Measure water into small bowl; add vinegar and egg.  Mix together and add to flour mixture.  Work into a dough.  Work until you can form into a ball.  Cut it into 6 equal parts and make 6 smooth balls.  Cut a 12 x 12 inch piece of wax paper.  Sprinkle a little water on your counter and place the waxed paper on top (water keeps the paper from moving).  Generously flour the paper.  Flatten a ball of dough into a thick type pancake about 1 inch thick and place dough onto the floured, waxed paper.  Roll out with a rolling pin into a circular shape.  When enough flour is used, the dough should move easily across the paper.  If not, use more flour.  Roll out the dough to cover the paper to a size 1 inch past the size of your pie pan perimeter.  Repeat with another ball to make the second crust, for bottom and top of pie.

Mix all ingredients and set aside while making crusts.  Put first crust in bottom of pie pan.  Sprinkle with 1 tablespoon of flour on bottom of crust.  Fill crust with cherry mixture.  Sprinkle top of cherry mixture with 1 tablespoon flour, covering entire area.  You can dot with pats of oleo if you like.  Put other crust on top of pie.  Fold top crust slightly under bottom crust all around the edge of the pie. Take a fork and press around edge to seal and to finish the pie.  Take a sharp knife and poke about 4 small holes into top of crust to let out steam.  Sprinkle with small amount of sugar. Bake for 15 minutes at 400 degreees, then turn down to 350 degrees for remaining 30-45 minutes.  Pie is done when golden brown and some filling may be bubbling out.