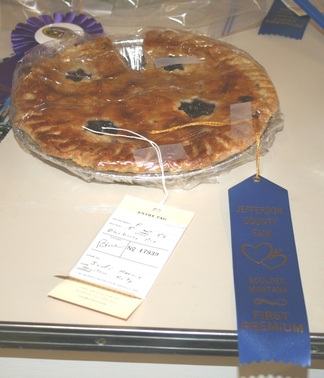 In a large bowl, combine the flour, sugar, and salt. Add the butter and vegetable shortening. Cut them in using a pastry blender. Blend it until the mixture resembles a coarse meal the size of peas.

Add the buttermilk and mix it until the mixture is just moistened. You don’t want it wet.

Press the dough together and divide in half. Wrap each piece in Pres & Seal and chill for 1 hour.

Roll out one half of the dough on a lightly floured surface, in a circle 3 times larger than the pie pan you plan on using. Fit the round dough into the pie pan and either flute the edges by turning the excess underneath around the edges of the rim, or leave as is for a double-crust pie.

For a top crust, roll out the second half the same size and shape and place it over the filling. Seal the edges, trim and flute the dough.

In a large bowl, stir together the sugar, flour, and cinnamon.  Add the blueberries and toss them together, coating well.

Place the bottom crust in the pie plate. Using a pastry brush, brush the bottom crust with egg white. This will set up the crust to bake and brown properly. Spoon in the filling mixture.  Sprinkle the lemon juice over the fruit and dot with butter.

Cover the mixture with the top crust and fold the top edges around the bottom edges.  Make four slits in the top with a knife to let the steam out. Place the pie on a cookie sheet to catch any drips.

Bake the pie for 1 hour or until the crust is golden and the filling bubbly.

Remove the pan to a wire rack and cool the pie completely before serving it. The pie will be too runny if it is sliced hot.