My name is Judi and my husband Doug and I live in Montana.  We love it here!  I'm a secretary and work for a heating, ventilation, and air conditioning company in Helena. I have three bosses.  I've been there for over 10 years.

Doug is a retired California attorney.  He is very involved with our State government; both House and Senate and lobbies for various organizations when asked.
​
We have a cat named Cricket.  He's a Norwegian Forest cat. We got him at the pet store in Helena on March 28, 2012. He was sleeping in a cage with his two brothers.  I noticed that he had fur on his ears like a bobcat and also had ear tufts. I asked the lady at the pet shop if she could take one of the kittens out so we could see if he had webbed feet. The only kitten who wasn't busy the time was Cricket (one of his brothers was eating and the other one was in the litter box), so she took him out. I handed him to Doug for him to hold him upside down so we could check his paws. Cricket began purring immediately and he and Doug were joined at the hip for about 15-20 minutes.  Doug is normally very allergic to cats, but he didn't have a problem holding Cricket. He's a love and is so energetic - loves to play, pounce, and snuggle.  Cricket's philosphy in life is to: play, eat, love, then play some more! He is a wonderful addition to our family.

The picture just below this is Cricket's "first kitten picture" - I took it 2 weeks after we got him. Recently, he was taking a bath on the couch and struck almost the same position - except with the other back paw.
a 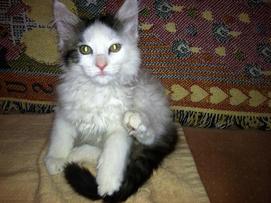 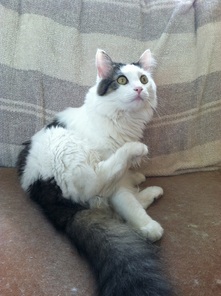 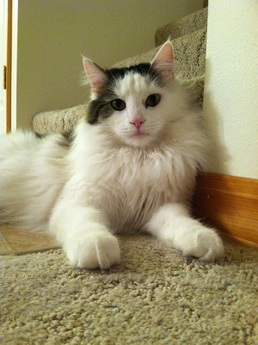